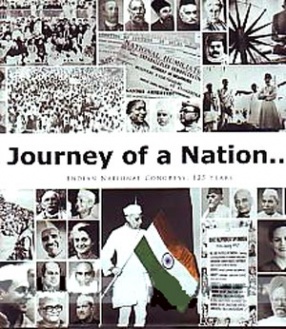 Actually I did’t remember the exact period but most probably during the times of my secondary education, when I exposed to Indian modern history in a minimal way which has a profound impact on me. It was the time, I felt patriotic and consciousness developed in me, as India is a nation and I am Indian citizen. It was the time, when I began to praise the Indian national movement and the role played by Indian National Congress (INC) in freedom struggle.  But in the year 2004, 14th general elections were held in India and congress party, once which led the national movement and brought freedom to India was not in power for 8 consecutive years, from 1996-2004 and struggling to establish the government in 2004 and aligned with various other parties and formed a coalition government of UPA. It is the first time, I encountered with the dilemma ; why the congress party which led the freedom struggle and attained freedom to India from the shackles of 200 years imperial British rule now struggling to form government and making petty overtures with different regional parties to form government ?. At that time I can’t able to get the answer due to my age constrains, but during these 10 years of time period from 2004 to 2014, I gradually solved that puzzle with time being by closely watching the 2009 and 2014 general elections and my exposure to detailed Indian history. Then slowly, my hatred for contemporary congress increased and respect to INC heightened.

Although INC established by British national A.O Hume in the year 1885, the main backstage role played by the prominent Indian nationalists like Dadabhai Naoroji and Dinshaw wacha. It was formed based on the principles of, to maintain internal democracy within the party and to take any important decisions based on the majority vote and to elect the party president periodically. From the beginning congress was not conceived as party but as a movement. It incorporated in it very broad objectives like secularism, democracy and different political trends and objectives. Although there were splits in the congress party in pre independence period like surat split of 1906, formation of swaraj party and socialist parties, they are rather ideological but not political for personal aspirations. Some of the historic decisions by the congress party were taken after heated debates and on the basis of open voting. For example, the decision to start the Non- cooperation Movement were taken 1920 at Calcutta with 1886 voting for and 884 against Gandhiji’s resolution. Similarly at Lahore congress 1929, resolution sponsored by Gandhiji condemning the revolutionary terrorist’s attacks was passed by a narrow majority of 942 to 794. Sardar vallabhai patel, Maulana azad, Rajendra Prasad C.Rajagoplachari and Jawaharlal Nehru in post independence period maintained the democratic ethos within the party and tried to take decisions based on the majority opinion and does not give preference to individual aspirations.

Death of Nehru was the crucial event the history of congress party and slowly power politics replaced the politics of ideology within the party. Party leadership slowly went in to the hands of group of people aspiring for power called as “syndicate”, initiated the shattering of democratic norms within the party. Nehru never wanted congress party to become a Gandhi-Nehru party but eventually election of Indira Gandhi as the prime minister of India paved the steps for it. Power politics between syndicate and Indira Gandhi were finely tuned over the election of president after the death of Zakir Hussain. Indira opposed the nomination of Sanjeev Reddy, prominent member of syndicate and supported V.V. Giri.  It results to the split of congress party into congress (O) and congress (R). In 1971 general elections, congress (O) of syndicate completely rooted of and Indira Gandhi congress (R) became victorious and only one congress: Indira congress remained in the country. Indira became the unchallenged leader of congress and at this point Indira became congress and congress is Indira, and so congress was no more the congress of 1885.  Role of Sanjay Gandhi played during the emergency (1975-77) and decisions taken by Indira during emergency completely shattered the democratic ethos within the party. After the death of Indira by his Sikh bodyguards, one more principle of parental INC left with the congress was secularism and that too lost in anti-Sikh riots promoted by the congress in avenge of Indira death and killed nearly more than 3000 Sikhs all over the country. Rajeev Gandhi became the PM and added one more new dimension, corruption to the party by indulging in Bofors scandal. Then there is nothing new to talk about the Sonia Gandhi and Rahul Gandhi as we are seeing their dynastic politics from last two decades. I am very critical to say that, present form of congress does not have the right take over the credit of Nehru, Patel and other prominent leaders of India national movement because it was not at all the party of pre independence era. So at the end, I found answers to most of my puzzles and dilemmas faced one decade ago and that is reason I hated contemporary congress but loved the Indian National congress………………………………

“It is first article in series of articles to be posted about political parties of India, by reading this article, don’t view me as adherent of BJP or any other party and I have my individual opinions and my own way of interpretations about different parties.”